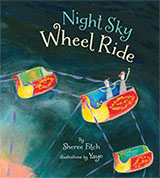 in the whole wide whirling

We are fizzy with the dizzy

fuzzy with the Ferris wheel

Sheree Fitch’s brilliant poetry and Yayo’s vivid artwork light up the night sky in this wonderful picture book for kids young and old.

“A visit to the fairground turns into a wild romp through realms of the imagination.” —starred review Quill and Quire

“Poem and pictures unite in a delirious celebration of a first ride on a Ferris wheel.” —starred review Kirkus Reviews

Finalist for the Elizabeth Mrazik-Cleaver Award

Yayo is the author and illustrator of many award-winning children’s books. Originally from Colombia, he lives in Montreal, Quebec with his family.

is an educator, literary activist and author of poetry, picture books, nonfiction, plays, and novels for all ages. After completing her course work for her masters in English with a focus on children's literature, she has been a full-time writer. She has additionally taught Children's Literature at St. Thomas University and Teaching Poetry and Writing in the Faculty of Education at the University of New Brunswick. Sheree currently lives in Nova Scotia.